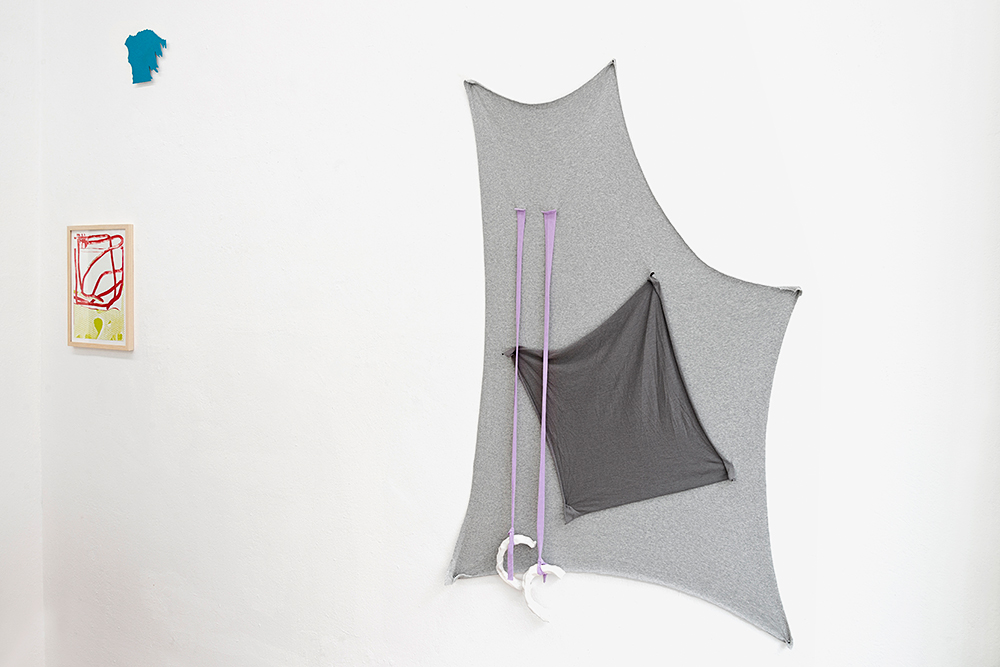 On Stranger Ways features Allison Wade, Volker Saul, Michael Pfisterer, Sterling Lawrence and Dan Devening; a group of artists from the United States and Germany affiliated with the Chicago gallery devening projects + editions. The show, much like the work presented, is an aggregate of carefully selected and loosely connected ideas and materials assembled into a logical whole. Within the work of each artist, we recognize a desire to order, to make sense of the stuff each finds as they navigate the world. Order is a good word; it suggests an imposition of will, a rightness of placement and context. It happens through the dichotomies and juxtapositions that occasionally occur in the work; at other times, form is separated from context to arrive at essential new properties. The material-based work reflects strategies inherent to how research, experimentation and consideration lead to a resolute position. The artists are collecting, documenting, isolating, distilling and displaying; they’re also applying very subtle and poetic moves to their process to reveal something newly discovered. On Stranger Ways feels like a loosely woven fabric; the fibers are distinct but the composition they create has a beautiful sense of order and completeness.

Allison Wade draws on a stockpile of hand-made and found objects to construct tenuous, straightforward arrangements of unexpected material juxtapositions. The work relies heavily on balance and tension, and there’s a strong focus on the conjunction of elements. Simultaneously aware of the specific relationships of the parts and the coherence of the whole, the viewer senses an idiomatic approach to making that reveals its own intuitive logic while inviting interpretation.

Raised in Texas, Allison Wade currently lives and works in Chicago. She received her MFA from the School of the Art Institute of Chicago and holds a BA in English literature from Stanford University. Her work will be featured this summer in a solo exhibition, Thin Troubles, at Ditch Projects in Oregon and a group exhibition, On Stranger Ways, at Scotty Enterprises in Berlin. Other recent solo shows include Conduits and Offerings at the Clough-Hanson Gallery at Rhodes College in Memphis and The Rest of the More at devening projects + editions in Chicago. Wade is represented by devening projects + editions in Chicago.
allisonwade.com

Since the mid-80s, Volker Saul has been primarily concerned with drawing and its translation into other media and disciplines. He has produced wall works and ground-based objects and has presented those as discrete works and in grouped, wall-scale installations. He has made site-specific wall paintings and works operating in the intermediate range between image and object.

Volker Saul has been featured in exhibitions in Nagoya at Gallery HAM in Paris; at Galerie Gutharc-Ballin in Auckland: at City Art Rooms. His works were exhibited at the Kunstverein kjubh, the Herder Raum Für Kunst and the Japan Cultural Institute in Cologne; Galerie Gröllepass:projects in Wuppertal; the Rheinisches Landesmuseum in Bonn; the Leopold Hoesch Museum in Düren; the Dortmunder Kunstverein; and the Kunstverein Mönchengladbach. In 2011, he had solo exhibitions in Chicago at both the Gahlberg Gallery at the College of Du Page in Glen Ellen, Illinois and devening projects + editions. In the U.S. he has been part of group exhibitions at the Pratt Institute in NY and the Zolla Lieberman Gallery in Chicago as well as numerous other international group exhibitions, public art projects and commissions. He has received the Günther and Carola Peill scholarship, the Kunstpreis des Kreises Düren and the Euregio Art Award from Kleve. Volker Saul lives and works in Cologne.
volkersaul.de

In his most recent projects, Michael Pfisterer has been photographing early 19th and 20th century mathematical and biological models found in various university and library collections. Once photographed, the objects are carefully stripped of their context and left as empirical evidence of a once, very specific usage. The decontextualization of these mysterious objects divests them of their original meaning and loads them with new associations. Through photography Pfisterer presents images outside of their original, pragmatic, syntactic or semantic characteristics, in order to explore new multi-focal relationships between illustration, reference, exposition, display, assumption, analogy, concept, prototype, formula, theory, system, sign, fiction and vision.

Michael Pfisterer studied in Mainz and Hamburg, Germany; since 1998 he has shown his work in solo and group exhibitions in Shanghai, Chicago, Boston, Hamburg, Cologne, Leipzig, Paris, Vienna and many other cities. Michael Pfisterer is currently Professor of Visual Communication at the Akademie Mode and Design in Hamburg where he also lives and works.
michael-pfisterer.de

Sterling Lawrence’s sculpture deliberates on the failed utility of assigned function. In works inspired by photographs found in design catalogs featuring the work of Vico Magistretti and Charles and Ray Eames, he tempers the utilitarian nature of each component and drifts into territory of a more uncertain kind. Composed as a schematic, the installation works together through interrelated displacements; meaning and use are altered through contextual shifts and formal disturbances.

Sterling Lawrence has exhibited in Chicago with Tony Wight Gallery, devening projects + editions, New Capital via Forever and Always Gallery and Carrousel Space Projects. Sterling has also shown at Half/Dozen Gallery in Portland OR and Pacific Northwest College of Art. He lives and works in Chicago. He received his MFA in 2011 from the School of the Art Institute of Chicago. He’s currently an instructor in the Print Media Department at the School of the Art Institute of Chicago and adjunct faculty at Carthage University in Wisconsin.
sterlinglawrence.com

For the past eight years, Dan Devening’s practice has been a manifold of studio action, curatorial actions, teaching and gallery direction. His most recent output as a visual artist is a manifestation of how these mixed endeavors evolve into a focused act of art making and exposition. Collage, fragmented installations and framed constructions suggest that the loose bits that make up one’s life are easily the most accessible and poignant vehicle for expression.

Dan Devening lives in Chicago and is currently Adjunct Professor in the Department of Painting and Drawing at the School of the Art Institute of Chicago. His most recent solo shows were KIOSK at the Tarble Arts Center at Eastern Illinois University and pendent ex ea at Autumn Space in Chicago. He has shown his work extensively in the United States including recent projects in New York at Launch F18, Apex Art and Printed Matter, Inc; in Chicago at ebersmoore, Roy Boyd Gallery and Julius Caesar; and in Los Angeles at Kinkead Contemporary. Recent international projects include exhibitions in Germany at the Kunstverein Recklinghausen; the Museum Kurhaus in Kleve; dok25a in Dusseldorf; Renate Schroeder Gallery in Cologne; and galerie oqbo and Neues Problem in Berlin. He is the director or devening projects + editions, a gallery project founded in 2007 featuring exhibitions and site-specific installations by emerging and established international artists and co-founder of Paris London Hong Kong, a new exhibition project in the West Loop Gallery District of Chicago.

FAE (Made in Russia, America…)