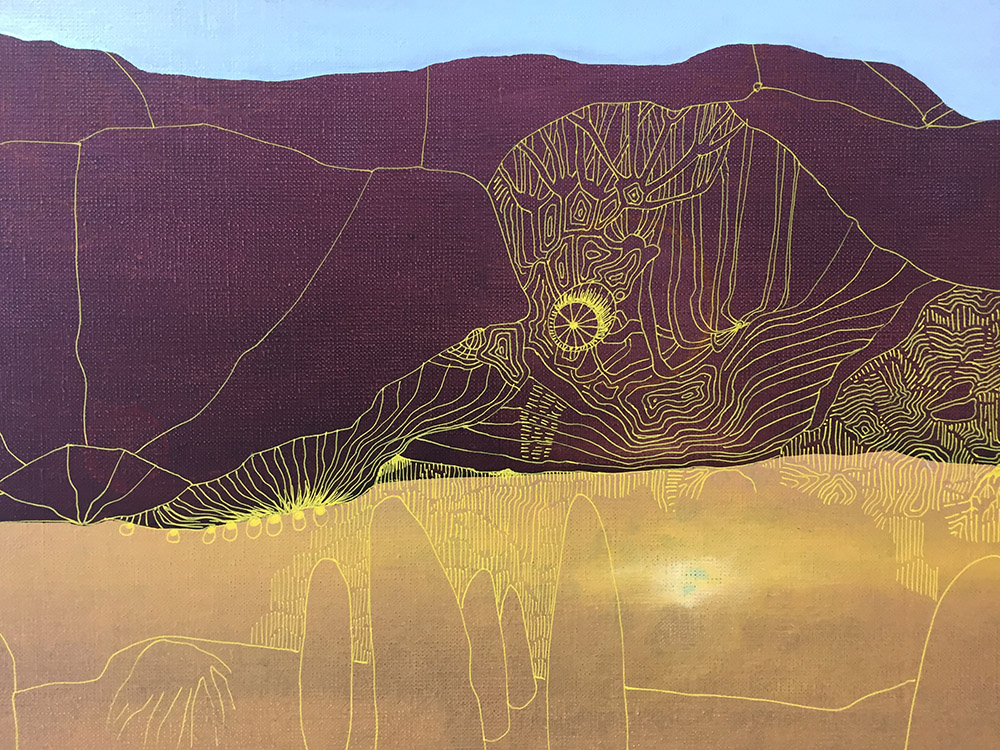 To kick off this year’s new exhibition series on the theme “Der Schein der Dinge” (“How Things Appear”) SCOTTY has invited three Norwegian artists who explore different views and relations to nature through paintings, installations, collage and sculptural objects. Some works relate to current political and environmental issues, for example climate change and the extinction of animals and plant; others relate to how we are affected by places and landscapes or how the forces of nature influence society. In poetic ways the artists work with social and natural relations which are normally hard to see and grasp.
The exhibition is curated by Line S. Hvoslef.

Randi Nygård is born 1977 in Bergen, Norway. She works and lives i Oslo, Norway and Berlin, Germany.
Nygård works both with collages in various forms, and with drawings in form of frottages. Her works often depart from facts that link language to material or society to nature. They are often visualizations of relations that are invisible and difficult to sense. One example can be that time might not be a fundamental structure but something that arises between things. She is interested in trying to visualize our complex relations to natural cycles and in she is interested in what life or life forces in themselves are. In her work she also seek to find a force both in the material and in the visual imagery. Lately she has been working with carbon that creates clouds, glaciers that are breathing and plants that are in danger of extinction due to climate change.

Maja Nilsen is born in 1978, in Klæbu, Norway. She lives and works in Berlin, Germany and Oslo, Norway.
The work of Maja Nilsen is created from memory and imagination, residing somewhere in the tension between autobiographical reference points and poetically immersed dream worlds. She works in a cross/multimedia manner that mostly results in site-specific projects, installations and collages.
Nilsen is interested in how people have lived their lives and how we through history have tried to understand the world around us. So her art tends to expose connectivity with the past, present and future existences. She has been specially occupied by how people relate to nature and how places and landscapes affect us. Much of Maja Nilsen work is ‘site-specific’, that is, made for a particular site and place, and taking its ideas and inspiration from an aspect of it which engages her creatively and conceptually. This involves a sensitivity and responsiveness to place, not only the geographical and physical site, but its local history, ecology and mythology. Her work often evolves from personal research and collaborating with different types of scientists.

Line S. Hvoslef is born in 1965 in Stockholm, Sweden. She lives and works in Bergen and Steigen, Norway.
Hvoslefs main focus has been in painting, but the last years she has also been working with large sound installations and video in collaboration  with composers. Her landscapes can be seen as both figurative and nonfigurative. She tries to describe a world between nature and technology by combining organic an artificial elements. The paintings describes places, sceneries or landscapes. Often in a surrealistic manner.
She wanst to inspire to imaginary journeys in many directions. Into the artificial future or back in time into history and tradition. Technically, it is either oil on canvas, mixed technique on wood and paper, or video and audio walls. In her videos she makes animations based on here own paintings and prints. In her large „audio walls“ she integrate small „instruments“, speakers and led lights into her visual world.